Roofing is a huge industry. In fact, it’s the largest supplier of materials for most homes according to the U.S Census Bureau. In addition to metal, tile and asphalt shingles are also popular roofing materials among homeowners in America today. Call our Worcester Roofer Company today.

The three major types of roofs are metal, tile, and asphalt shingle roofs. Each category has benefits, but there are certain features that make them better suited for specific applications. This article will discuss all three categories of roofing material in detail to help you determine which one would be best suited for your home’s needs.

There are several types of metal roofing systems available on the market today with the standing seam being the most common type by far due to the number of benefits it offers for most homeowners.

The Benefits: Metal roofing systems can last a lifetime and are often referred to as “lifetime” roofs by many manufacturers because they never need to be replaced. In fact, the only maintenance required with metal roofs is occasional washing or power-washing which can extend the life of your roof even more. In addition, thanks to new technology, metal roofs have become very energy efficient in recent years making them a great choice for many homeowners.

Metal roofs also reduce noise pollution significantly due to their acoustical properties and durability which makes them a favorite among homeowners that live near airports or train tracks where aircraft and train noise is prominent throughout the and night. They’re also made from recycled content which means they’re, in most cases, Eco-friendly.

There Are A Few Drawbacks: Metal roofs can be very expensive and require a significant amount of labor compared to other roofing materials such as tile or asphalt shingle roofs for example. In addition, due to the nature of metal being a heat conductor, it will heat up your attic significantly more than an asphalt shingle roof would during hot summer months so ventilation is a must with metal roofs.

While there are many different types of tile roofing systems available on the market today from concrete to clay, Spanish style Tiles reign supreme in popularity among homeowners from coast to coast thanks to their classic appeal that never goes out of style making them a great investment for homeowners looking to increase the value of their homes. 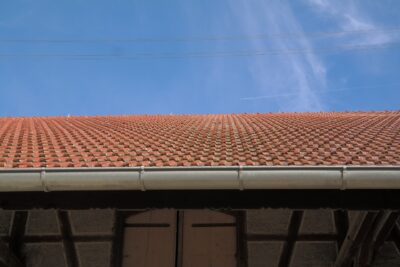 The Benefits: Tile roofs are very durable and will last most homeowners a lifetime. In addition, most manufacturers offer at least a 50-year warranty on tile roofing systems so they have the second-longest average warranty behind metal roofs. Spanish tiles are also considered one of the more Eco-friendly types of materials available thanks to their long lifespan which eliminates landfill waste associated with older shingle roofs that need to be replaced every 10-15 years or so on average.

Tiles Are A Few Drawbacks: Tile roofs can be extremely heavy depending on how thick they are, where they’re made, what type of substrate they’re being installed over etc…which can make them difficult to install and in some cases, if the roofer isn’t careful, could void their warranty. In addition, tile roofs can be very expensive and require a large investment out of pocket from homeowners.

There are two major categories of asphalt shingle roofer systems: Architectural and three-tab shingles which is by far the most common among contemporary homes today for their affordability and a great look that makes any home stand out from its neighbors.

The Benefits: Asphalt shingle roofs are easy to repair in the event that one section becomes damaged by hail or wind storms and nearly anyone can complete a small repair job in just a few hours’ time without too much difficulty at all after receiving professional roofer instructions on how to do it. It’s also one of the best options for homeowners living in areas that are prone to wildfires because asphalt shingles are made from non-combustible materials which means they won’t ignite during a wildfire.

Asphalt shingle roofs have little to no maintenance associated with them so they’re truly one of the most low-maintenance roofs available on the market today and last about 10 years on average before needing to be replaced after getting close to the end of their lifespan.

There Are A Few Drawbacks: Asphalt shingle roofs do not insulate your attic like tile or metal would so the heat gets trapped in your attic during hot summers which can make it sweltering during those months and cause your conditioning unit to work overtime all summer long.

What Type of Roof Is Best For Me? Contact a local roofer today when you call Worcester Roofing and Siding.